How long does menopause last? It depends on how you look at it, and most women don’t do this with the bigger picture in mind. They really should though because their future health depends on it.

As hormone levels are changing some of the more common symptoms include:

It’s really variable how long this lot can last, but most studies suggest it can last for – 7-12 years! Even that’s not a guarantee. I see plenty of women in their 70s who still have hot sweats, although in most women they do settle at some point.

And there are of course the lucky ones who have none of the above. This is largely due to genetics.

How Long Does Menopause Last Really?

This is true for all of us, whether we have the obvious symptoms or not. It’s THE thing I’d like more women to think about as they’re making decisions on how to look after themselves for their future.

Some of the initial symptoms settle as your body adapts to low oestrogen levels, but certain areas of your body suffer as time goes on:

Oestrogen offers a lot of protection against these three big threats. It protects the heart, the brain, and bones.

There are other long-term consequences too.

In 1901 the average life expectancy of a woman living in the UK was 52.4 years. Only 5% of women made it to older years. Menopause wasn’t a big issue back then.

Over the last century life expectancy has gone up and up. This means women are now facing the prospect of several decades without oestrogen. I see this as a good problem to have! There’s never been a better time to be menopausal – we have so much available to us! 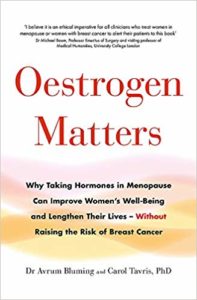 One of the best books I’ve read about oestrogen is Oestrogen Matters by Avrum Blumming & Carol Tavris.

Having a read of this will help you make an informed decision about whether hormone replacement is right for you. I like this book because it’s based on science, lots of research, and not hearsay or scaremongering about breast cancer.

The next menopause workshop in on the 15th March 2020, are you coming?

The Essential Guide to Menopause, HRT, and Bio-identical HRT

Enter you email address and get your free copy.

Today we’re talking about the earliest sign of a

How to be a Menopause Badass week 3! Is HRT safe?

Just about to start week two of our menopause work

Great afternoon at Hot Yoga Sheffield as myself an