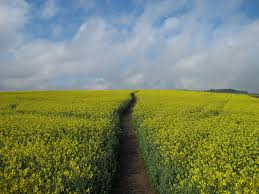 I had an email from one of my subscribers last week:

Hi Dr Julie, I really want to get healthier but I can’t seem to changes my ways. The biggest things I let myself down with are eating too much, going to the pub too often and smoking. Can you tell me how to break a habit like this please?

No small order for one blog, but here goes!

These things are recognised as habits by Paul, but what is a habit? A habit is a learned behaviour. It’s a settled or regular tendency or practice.

Habits can be good, for example walking instead of taking the car for short distances, hydrating your body well by drinking healthy drinks.

But obviously habits can be bad too, like Paul’s. These often feel really difficult to change.

Imagine a field, like the one in the picture. There’s a well trodden path. If you wanted to get to the other side of the field you would take the path of least resistance, and use this established path. It’s possible to make a new path, but human nature is to take the easy option and travel along the well trodden path.

This path is like a habit – established and engrained after lots of use, perhaps years of use.

How To Break A Habit

The best way to break a habit is to establish a new one. It’s not about trying NOT to do something (like going to the pub too often or smoking), it about creating something new instead. It’s like looking at the field with the well trodden path and deciding to make a new one.

At first this feels difficult, wading through long plants and having to lift your legs up high. But each time you take that new path it gets a little easier, until eventually it becomes a well trodden path itself. Meanwhile the old one is starting to grow weeds through lack to use.

There are two things you need to do before starting to create your new path:

Paul’s goal is to get healthier. He needs to define that much better, what does that mean specifically for him? Where is he headed exactly? Without defining this, Paul will very quickly be back at his starting point – at the pub with a fag in his hand. Click here for more help with how to do this.

He then needs to accept that this may feel a little challenging or even strange at first. This is because he has successfully programmed himself (probably over years) to overeat, smoke and go to the pub often – this has taken a lot of practice to get to this stage! It’s going to take more than five minutes to create something new, and new things often feel strange at first – that doesn’t make them wrong.

Fold your arms, now fold them the other way – it feels wrong doesn’t it? But it’s not wrong, it’s just different. Doing different things feels strange at first – this is normal, you just have to get on with it until it doesn’t feel strange any more.

What are the new habits going to be? Paul needs to decide this up front. It’s difficult to just stop doing something, it creates a void that needs filling. If Paul doesn’t plan what this new thing, or things, are going to be – he will be drawn back to his old behaviour.

It can take several or even many attempts to break a habit. People often fall over and revert back to old habits. The people who succeed in changing their ways are the people who keep getting back up again and again, refusing to be beaten by choices they made in the past (when they established this behaviour).

Anyone can learn how to break a habit – it’s a matter of deciding to, making a plan and just getting on with it.

If you have any questions or comments please post below.

Have a great week.

PS Sign up to get my weekly newsletter here, (you’ll get a free health guide too)

2 thoughts on “How to Break a Habit”