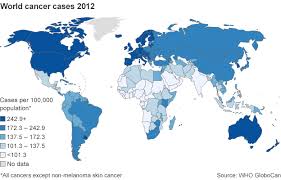 Imagine this – there was a terrible storm and your home got flooded, causing massive damage to many things you hold dear. It had a terrible effect on you and your family. How do you feel knowing this could have been prevented?

Here in the UK we have a lot of that going on in some parts of the country, with a lot of anger directed at the government for not doing enough.

Now imagine something even worse – you get diagnosed with cancer… How does this affect you and those close to you? Take this a step further – how do you feel if this could have been prevented?

The WHO is warning us about a ‘tidal wave’ of cancer, and calling on restrictions of alcohol and sugar to be considered, among other things.

Cancer is already at record highs, but they are predicting massive rates in the next 20 years. They are also saying that at least half of those can be prevented.

It’s great that the idea of how to prevent cancer has hit the headlines because I agree with what is highlighted in this report – that there is an ‘alarming level of naivety’ when it comes to the role of diet in cancer.

To demonstrate this – a survey was done in the UK on 2,046 people. 49% didn’t know that poor diet choices increase your risk of cancer.

In the UK, and other countries like us – other European countries, the US and Australia, much of the common cancers can be prevented by being a healthy weight, eating a healthy diet and being regularly active.

Also in this report they mention that the government has responsibility for creating an environment that supports healthy lifestyles. Hmm… If they can’t keep water out of houses I’m not sure I would trust them with keeping cancer out of my body…

If you don’t want to get ill you HAVE TO take responsibility for yourself, you CANNOT abdicate this responsibility to someone else, least of all the government.

The first thing to do is have a look at your lifestyle and think about changing the things you know are bad, like smoking and drinking too much alcohol. If you’re not active – get active! Refined sugar is totally abnormal to a natural human diet and it feeds cancer – the less you eat the better.

Here are a few previous blogs which will give you a bit more to read.

Easy Way To Slash Your Chance of Getting Cancer