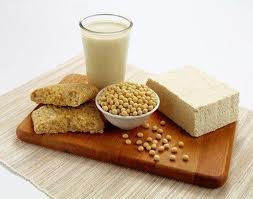 Are claims by advertisers that soy is a healthy option true? Is it good for your health? Does it benefit your heart and lower your cholesterol? Is it a healthier option compared to meat and dairy? Or is soya bad for you?

In common with other beans, the soya bean contains phytic acid, this is normal for beans but unfortunately it’s not very good for us. In fact soya beans contain very high levels of this compared to other beans.

With other beans you can largely get rid of this by soaking and rinsing before you cook and eat them. This doesn’t work with the soya bean, even after extensive processing this stuff is still present.

When humans eat phytic acid it reduces our ability to absorb and use things like calcium, magnesium, iron, zinc + other nutrients. This obviously isn’t healthy.

The first step of processing soya beans involves soaking them in large vats of hexane (a chemical found in petrol/gasoline). Hexane is commonly used to extract oils from seeds and vegetables by large commercial oil processing plants.

The hexane helps with the separation of the oil, protein and fibre which makes up the bean.

The oil is destined for things like soya spreads. The protein will be used to make things like tofu and other meat substitutes.

How do you know if all of this hexane is removed before you eat it?

It isn’t, and it has been shown in independent labs that it can still be present in small amounts.

Until recent times soy was considered unfit for human consumption. Modern chemical processing methods created by big business, and a fortune spent on advertising, has convinced many of us that soya is the healthy option.

But the fact is all soya products are highly processed. In common with all highly processed foods they contain numerous toxic compounds that cause disease in humans when eaten regularly for a long period of time.

What’s good about it?

The black marks could go on and on. But what’s good about soya products? They are cheap to make, and make the food industry tons of money, but that’s about as far as the good points go.

Do your health a favour and avoid this highly refined and processed abnormal chemical plant food – yuk!

Uber (soya-free) Health to you