Last week I touched on how antibiotics cause weight gain. So why are antibiotics in food when we have an obesity epidemic?

Most antibiotics sold aren’t for people.

In the EU 70% of them are destined for agriculture, even though in 2006 their use was banned as a growth promoting agent (at least in the EU).

Why Are Antibiotics In Food?

What happens to people on a flight when one has the flu? Loads of people the flu, because they’ve been packed together and can easily share each other’s germs.  The same thing happens with these creatures who are crammed artificially closely together.

As a result infection is rife and lots of antibiotics are used to control this, because EU farmers are still legally allowed to use antibiotics when problems occur- which is often.

Although they are illegal to use in animal feed it still happens, e.g. the 2014 scandal in the Netherlands

Also the EU imports a lot of meat where different rules apply.

With processed meat in particular you don’t even know what animal it’s from let alone what crap might be in it.  Remember the horse-meat lasagna scandal?

The fact is today’s intensive farming methods lead to over-crowding – take a look at the conditions farmed salmon are reared in! 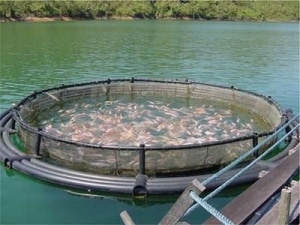 The upshot is – if you eat meat and fish you’re most likely getting antibiotics too.

You’ll never find this on a food label, this stuff is kept pretty quiet.

But like the farm animals which can be fattened up with continuous low dose antibiotics in their feed (from last week’s blog), it makes you wonder with the ever increasing rates of obesity..

It really does make you wonder what the hell you are eating doesn’t it.

There are lots of issues surrounding weight that’s hard to shift – how clued up are you?

Do You Have What It Takes To Lose Weight?